I don’t get offended often – I mean, seriously, I deal with creeps during online dating; so, I’m used to a lot. However, there are some key issues that do offend me. I was scrolling through social media, and I came across a meme that actually made me want to cry, scream, and apparently blog.

Here is the meme I came across: 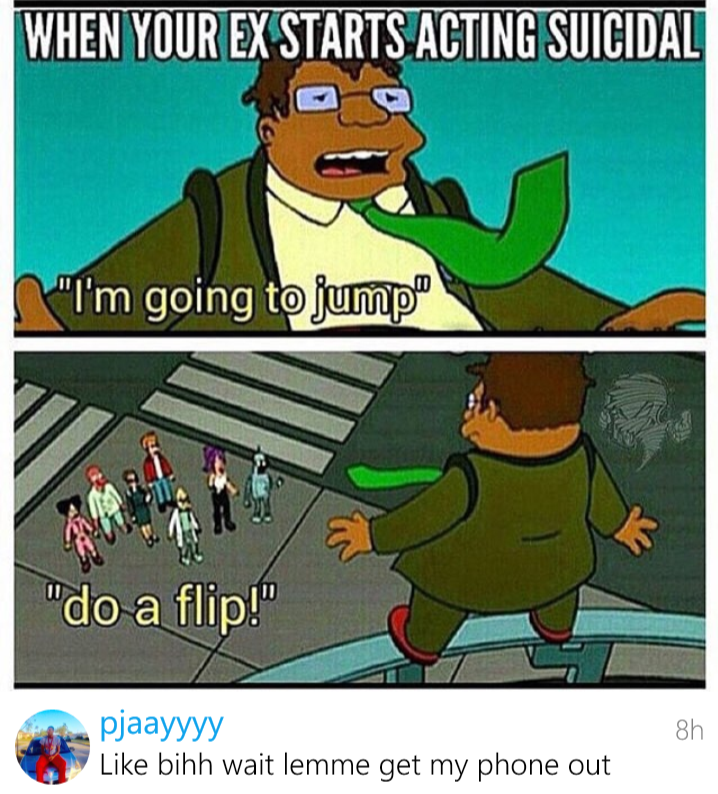 Now, granted I have seen this episode and they do make it light-hearted.

So, why did it bother me so much when I seen the meme?

Because the page I saw it on was a support group. This is a group that is supposed to support each other. Hundreds of people laughed or liked this meme. They joked about their ex completing suicide (granted, they didn’t use the phrase “completing”). I couldn’t. I didn’t. Why? Because if it hadn’t been for my ex, I probably wouldn’t be here today.

Before I go into my story, I will clarify why I use “completing” instead of “committing.” I use completed because they finished their suicide. Most people think of “being committed” as either a long-term relationship or a mental institution.

A few years ago I attempted suicide. I don’t remember much from that day. It’s more like I remember a few minutes here or there. I remember going to my ex’s house – it was my day to pick up my daughter. They had just got back from a few days trip out of state. He had bought her a brand new game, so she wanted to stay there and play her new game. I remember thinking to myself “I have to leave.” I was so hurt that my daughter did not want to come with me. I was hurt that ex had girlfriend. I was still so in love with him. I do not remember the drive to my house, at all. I remember grabbing a couple of bottle of pills and writing a note. I don’t remember what I wrote though. I started downing handfuls of pills. I remember my phone ringing. I answered it. It was my daughter calling. I do not remember the conversation. I remember it was that moment that I actually realized what I was attempting to do. I was going to do something so horrible that it was going to affect my daughter for the rest of her life. I started to force myself to get sick. My ex called this time. Again, I do not really remember the conversation. I remember him asking if I was alright. I said “I will be.” Ex came to my house. I had to go outside. I could not let my daughter see me like that. I was a mess. I remember him staying outside with me. I remember the feeling of the overdose.

That’s why I don’t take that meme lightly. Seriously, if my ex hadn’t intervened then I really doubt I would be here. (I know it was my daughter that called, but she did use his phone.)

After seeing that meme, I turned my energy into positive energy. I started painting. I painted three rocks – all supported a semicolon.

I do have a semicolon tattoo. It is my reminder that no matter how horrible life might be at that moment, I have to continue.

After I painted the three semicolon rocks, I posted online. I actually expected backlash from my paintings. Instead, I received love and support. Of course, I did not share MY story, but multiple people shared their stories. Loved ones had completed suicide and when they saw my rocks they felt positive emotions. They encouraged me to continue “rocking” the semicolon; to continue bringing awareness to mental illness.

Thank you for reading and following this blog. I know today’s post was sensitive. So, if you are having suicidal thoughts or tendencies, please seek help. Mental illness is tough. You have to battle what is in your own head every single moment of the day. Therefore, remember even on your “bad” days, you are a badass! Also, if you know someone that might be suicidal, please talk to him/her. Find help for them. Don’t be afraid to talk to them. Even if you are not sure of what to say, be there for them! Listen. Actually listen to them. Don’t judge.

And please be mindful of what you say!

I chatted with a guy a few years ago online. We never met in person due to distance. But we chatted daily for several months. He’d had someone close to him complete suicide. He was actually the person that his friend had called before he completed his suicide.

The guy – we’ll call him “Chris” – received a call from his friend. Chris told me that his friend was upset and crying. He talked about suicide. Chris tried talking his friend out of it, but the friend continued to say it was the only way. Chris said he was on the phone with his friend for over an hour. Chris was starting to lose his temper and get annoyed by the situation. Out of anger, frustration, and annoyance, Chris said something that continued to haunt him: If you are going to kill yourself, then just do it already.

Chris told me they hung up the phone and it was right after that his friend shot himself. Chris could not handle the guilt of that situation, so he attempted suicide himself. Somehow, Chris survived.

As we chatted, we shared our stories. It was nice to chat with someone that understood. I know he told me he really appreciated having someone to talk to about this. (When we’d started chatting it’d only been a year since his friend’s death. Chris was feeling extra depressed because another loved one had just died also.)

I lost touch with Chris about two years ago. We’d tried talking to each other again. It was just like as if nothing had changed, but still the distance was not ever going to change. We disappeared out of each other’s lives.

As you read the story about Chris, what could he have done differently? Call the police to do a wellness check. I know if you are not familiar with mental illness then it can be frustration and make you feel powerless. My ex told me about my “stupid” and “crazy” behavior during my attempt.