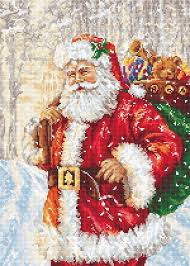 This time of year, I start seeing several Santa related posts online. When do you tell your kids there is no Santa? If you’re divorced, does Santa visit both houses?

My ex is a killer of dreams. He tried telling my daughter years ago there was no Santa – I think because he did not want to spend extra money on a gift. I, on the other hand, wanted my daughter to keep that magic and innocence for as long as possible. She came back from spending time with ex and asked me if there was a Santa, because ex said there was no such thing. I asked her what did she believe? I told her I believed in the magic of Santa – the ability to believe in the good in people, and do kind things for others without expecting anything in return. I’ve done the Elf on the Shelf with my daughter for several years – even before I was divorced. I know she knows it is me, but it is still fun. The make-believe and the different situations our elf gets himself into.

Why take away the fun? The play? The magic?

I also work at a photography studio. My daughter knows there’s a man that plays Santa – she has seen him before he is in his red suit. This Santa is amazing! He looks so real – all year long. He longs being Santa. He is a pro with the kids and takes awesome photographs! Every year I get a picture of her with Santa. Well, this year, of course, she is “too old” to sit on Santa’s lap. So, I did two different poses: 1. She is standing next to Santa. Her arm is propped on his should and she is focusing on her cell phone. 2. She is sitting in a chair next to Santa and they are both looking at her cell phone.

The pictures turned out adorable! Picture 2 will definitely be put on the wall at my house. Santa loved it. My daughter loved it. The studio loved it – will be using it next year to advertise for Santa photos.

Well, that was the positive that came from yesterday. Saturdays are ex’s day. He is still in the process of moving stuff out of his house – he should have started his month ago. But he even had his parents up – he is giving them all of his appliances and furniture. Didn’t offer me anything, haha. Bummer. But he was in a horrible mood. So, my daughter did not want to stay with him for a few hours – that put him in a worse mood. She said he was like that Friday night too. Ex, my daughter, and youngest of girlfriend’s kids went bike riding Friday night. I asked where was girlfriend – ex had both her a bike too. Apparently, still chilling in the bedroom.

I know I post a lot about being jealous that ex is in a relationship. That is NOT the type of relationship that I want! That was kind of how my marriage was, except ex would be in the same room, but on his phone – so he might as well had been in another room, another state, or even another planet.

I did see his parents yesterday. First time I’ve seen them in a least a year. It was not awkward. Apparently, every time his mom sees my daughter she’ll ask about me. I think that is nice. I don’t know if she is doing it to talk to my daughter? To actually care about me? To be nosy? Actually, it doesn’t matter. I don’t care what her intentions are. She hated me when I was married to her son.