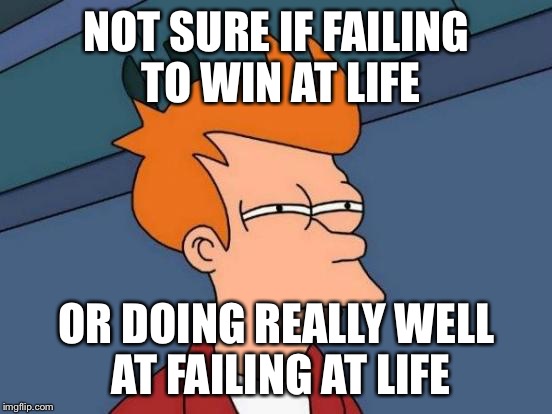 Well, my thought today is: I’m failing at life.

Everything is crashing around me.

Work and Money. Even though I work multiple jobs – hours this time of year are short because of the holidays and winter hours. Or, I have to cut hours for one job to get hours for another job. All of which hurts my bank account. Money is crazy tight – haven’t gotten a child support check for a couple of weeks; and yes, the weekly child support isn’t much, but every little cent helps. I thought I was getting my head above water last week. I cancelled insurance to save some money, and I talked to someone about getting a tax break for my property tax – turns out I was supposed to have been getting this break for several years but my paperwork “got lost” on their end. I honestly didn’t think must about it. I thought the break was just for one year. Of course, they are not going to back pay me all that money – I wish they would. Yesterday, I opened the refrigerator and it left a little on the warm side. Things were still cold. I don’t want to – I CAN’T AFFORD TO – replace that refrigerator right now. I shouldn’t have to replace it already. I bought it about two years ago. Yes, it was a cheaper one, but it should work longer than two bloody years!! I’m counting down the months until I get my car completely paid for – that will be extra money each month when I don’t have car payments – but I still have about ten months to go.

Dating/Relationships. I’m still having mixed feelings about ex. I actually had a dream about him. In my dream, he called me to bitch at me that I left him blue-balling. (A phrase that ex used often during our marriage. I’ve always hated that phrase.) I woke up so angry. Mainly, angry at myself. Why am I still dreaming about him?!?

I suck at dating. I haven’t even had a conversation with anyone in days. In fact, we’re slowly inching closer and closer to a year mark since I’ve been on a date!!

Parenting. Now, typically I know I am a kick-ass mom. I take care of my kid. I help her with school work. I drive her to her millions of activities. Just, last night, with everything that was happening I felt like I couldn’t even do that right. I had two loads of clothes that were needing to be washed. Before I went to pick her up from practice I had the first load in the washer. The second load was lying in the floor so I could throw it in the wash when I got back. When we got home, I put the first load in the dryer and started the second load in the washer. Well, apparently, my daughter and a friend decided they wanted to wear their new cheer shirts to match at school today. That shirt accidentally got thrown into the washer, too. I guess it was sitting by all of her bags for school, which was close to the second load of clothes and I just assumed it went with the pile of clothes. I forgot to check the clothes after that. My daughter waited until the very last minute to find her clothes for school. Yep, that shirt is still chilling out in the washer. Parenting fail.